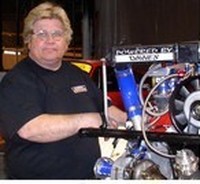 Peter Dawe’s interest in Porsche began in the late 60s while working at a local Porsche dealership in NJ while in high school and college. After graduation, he went on to become a crew member for the Altec Lansing team and got his first experience in the IMSA racing series in the early 70s. In 1975 Peter went to work for Andial. Over the course of his 35 year career Peter has raced and prepared cars at tracks around the world. He is currently an engine builder specializing in Porsche Race Engines.

At the age of 16 Kevin, who has been around Porsches all of his life, began working with his father Peter at PCA races on the East Coast. Soon after he was hired as part of the pit crew for the Kelly Moss Motorsports in the Mid West. He went back to work for Dawes Motorsports in 2001. Since then he has worked for Farnbacher Loles in the IMSA Cup series and two seasons with Brumos in the Rolex Daytona Prototype series.

Trevor started working at Race Inc. with his dad at the age of 16 and then went on to work for Kelly Moss for three years. He work with the Alex Job racing team for 4 years from 93 to 96. He then went on to complete 2 years at Penn Tech for Automotive Engineering. Trevor went back to work for Alex Job Racing in 2003. He currently works full time with Dawes Motorsports as an engine assembler and car builder.